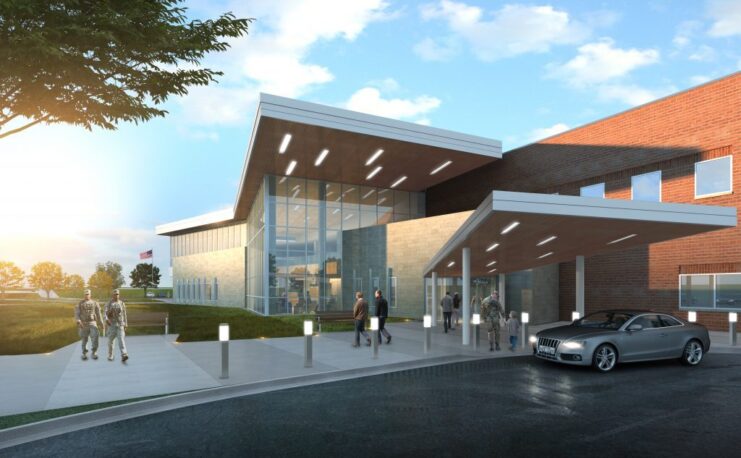 Ireland Army Community Hospital is undergoing changes to how it treats beneficiaries due in part to Army Medicine’s realignment with force reduction expectations. IRACH, which was built in 1957 and is the oldest hospital in the Army inventory within the United States, will transition to an outpatient clinic.

Col. Bob Cornes, the IRACH commander, said that $80 million was recently approved for a 102,000- square-foot ambulatory clinic and the tear down of IRACH.

“Construction (will) probably (begin the) spring of 2017,” said Cornes. “Construction will be completed the first quarter of FY19 (and we are) looking at moving into that building the spring of ’19.”

The clinic will be built immediately across from the 24-hour shoppette.

Cornes pointed out that the inner workings of the building are old and are falling apart. For example on several occasions an HVAC unit went down because the pipes get corroded and calcified.

As part of some of the changes, beneficiaries in need of labor and delivery services will use Hardin Memorial Hospital in Elizabethtown or the closest hospital that is near them, said Cornes.

Cornes added that the emergency room, inpatient clinic and surgical capabilities will be eliminated as part of the Department of the Army downsizing directive. He pointed out that the downsizing will begin during the early part of fiscal year 2017. But, the hospital will have a primary care outpatient clinic.

Another change will involve acute treatment versus an emergency room.

“Our current plan is to transition from ER to an Acute Care Clinic between October and December,” he said. “(We will) standup (an) acute care clinic (that) will not see any emergency issues. The hours for that (clinic) will extend beyond current normal operational hours, (but) anytime you have an emergency (you) will need to go to the closest ER (to you).”

What this means is if you are a retiree coming from outside the post you should go to a local ER, don’t come to Fort Knox.

Cornes pointed out that specialties that rely on surgical or inpatient capabilities, such as general surgery, orthopedics, opthamology and obstectrics will be provided by network partners.

“The clinic will retain some speciality care in our highest demand, nonsurgical areas such as physical therapy, allergy and dermatology,” Cornes said. “The new clinic will have the ability to perform radiology and ultrasound procedures.”

He added that the new building does not have space designated for an MRI.

Lt. Col. Beki Terry, the deputy commanding officer for IRACH, said they have coordinated with Tricare to ensure there are not issues with beneficiaries needing prior approval to visit another facility if the clinic is closed.

Cornes added that primary care patients who are currently being seen at Ireland will also be seen and treated at the clinic.

“Regular primary care (will) still come here (and) referral services (will be) for specialty care,” he explained. “We anticipate retirees will get high quality and safe care on Fort Knox and (with) our partners in the community. We are committed to ensuring our patients have the best care. Some (of the care) will be provided here and some (will be) provided in the civilian network.”

He pointed out they will continue working with VA as the hospital transitions to a clinic to ensure there isn’t a decline in services that are provided to veterans who use the current VA clinic on post. (insert text about VA)

The commander said Jordan Dental Clinic will be minimally affected by the transition because they have the space and capacity to treat Soldiers. But he added that oral surgeries will be done in the civilian network because they won’t have the capabilities to perform them in the future.

“When our providers do procedures they are using network facilities,” explained Terry.

Although clinic construction will begin in about 18 to 20 months, Terry said they are still in the planning process and that will take several more months.

As the Army’s force structure is reduced, Army medicine must scale its health care systems to align with force reductions. The Army hospital conversion is part of Army medicine’s ongoing and continuous assessments of its capabilities and staffing requirements to support readiness, quality care and safety of Soldiers, retirees and eligible Families.

Although the Army is operating in a fiscally constrained environment, Medical Command will continue to provide Soldiers, retirees and Family members’ access to high-quality care through direct care or the civilian network.

Stay tuned to The Gold Standard for more information as it becomes available.